This old-fashioned corn and sausage chowder is a hearty bowl of comfort. Evaporated milk makes it taste creamy and delicious.

With an easy prep, it can be ready to slurp in about 45 minutes, start to finish.

The recipe has a few more veggies and less fat than many other chowders, but you can take it in a richer direction if you want. (Read on to find out how!)

Want to make it in the slow cooker or Instant Pot? See the full recipe for instructions.

As an Amazon affiliate, I earn a small commission from purchases made through links on this blog at no extra cost to you. Thank you! 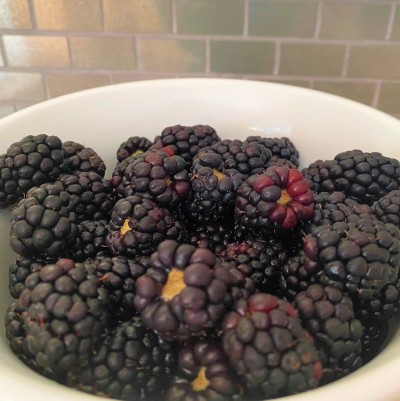 Subscribe to Food Hall! Get healthy recipes and other content delivered straight to your inbox! 🍴
Table of Contents

🦃 Sausage: Turkey sausage saves you fat and calories. It’s a healthy choice for those with diabetes or heart disease and for your waistline. No need for anything fancy. Use a tube of sausage meat like Jimmy Dean, Jennie-O, or a store brand.

🥔 Potatoes: I like russets because they are often less expensive. Plus, they fall apart after a long simmer, thickening the soup. Waxy small potatoes, such as gold or red varieties, are also fine.

🌿 Seasonings: That distinctive chowder flavor comes from bay leaf! You can add half a teaspoon of a dried herb like marjoram or thyme to boost the taste even more.

Broth: Use veggie or chicken broth or water. If you use water, it may be necessary to increase the salt in the recipe.

🌽 Corn: I like the convenience of canned corn. Just drain, and rinse off the extra sodium before adding it to the soup. Frozen corn, thawed and drained, is also fine.

🥛 Evaporated Milk: Choose the 2% variety to save fat. It still tastes rich and creamy. Or, if fat is not a concern, substitute whole milk, half-and-half, or heavy cream.

Cornstarch: It makes your chowder thick, and it’s gluten-free.

Start by browning the sausage in a Dutch oven or deep, high-sided 5-quart pan.

Add the chopped onion-celery-carrot to the hot drippings. Cook until the onion becomes translucent (see-through). Add the potatoes and cook for about three minutes.

Return the cooked sausage to the pan.

Pour in the broth or water, scraping up any browned bits from the bottom of the pan.

Bring to a boil and then, lower heat and simmer for 10 to 15 minutes, until potatoes are barely tender.

Stir in the corn and evaporated milk and heat for about 10 minutes to mingle the flavors. You can simmer, but do not boil.

Mix the cornstarch with the cold water and whisk into the soup to thicken. Taste; add extra salt or pepper if desired.

Serve in large mugs, crocks, or bowls, with a Tablespoon or two of cheese on top.

What to serve with it

A green salad and cornbread or crusty French loaf are all that’s needed on the side. One reason you’ll love this soup is that it is almost a meal in one!

This recipe for Simple Green Salad just might come in handy!

❄ Corn Chowder with Sausage will keep in a sealed container in the refrigerator for three days.

If you plan to freeze it, don’t add the milk or cornstarch until you thaw and reheat because the texture will suffer. The dairy-free base will keep in the freezer for three to six months.

♨ Warm a single bowl or cup of soup in the microwave (covered with a damp paper towel) on 80% power for a minute and a half to two minutes. Stir to distribute the heat. Top with cheese.

(Keep in mind that power levels and wattage on different models of microwaves vary. So, you may need a few seconds more or less.)

To serve your family, warm in a pan on the stovetop until the chowder barely begins to break a simmer. DO NOT BOIL!

Thaw any frozen soup overnight in the refrigerator. Proceed with the recipe from the point of adding the evaporated milk and then, the cornstarch to make your soup thick.

Why you’ll keep this chowder recipe in your backpocket

With inflation sending food costs soaring, this chowder feeds your family for less than 10 dollars!

Most of the ingredients are already in your pantry, fridge, or freezer. You probably have onion, celery, and carrots on hand, and maybe canned or frozen corn and evaporated milk.

Sausage is all you need to add to the grocery list. (Unless it’s in your freezer.)

(Did you know that canned and frozen foods are good for your health and your wallet? Read all about their nutrition virtues at Love Canned Food.)

The chowder tastes rich, creamy, and yummy with the sagey flavor of sausage and the sweetness of corn. Kids and adults enjoy this chowder!

This recipe is NOT low-fat, but it’s lower fat than most other chowder recipes.

Can I make this soup vegetarian? Yes! Add an extra can of corn and extra cheese on top or use vegetarian sausage in place of the turkey or pork sausage.

Can I use plant-based milk instead of evaporated milk? Yes; sub in any type except for coconut milk, which will change the flavor too much.

Can I use regular milk, cream, or half-and-half? Of course! But, for best taste do not choose 2%, 1%, or non-fat milk. You can also increase the milk to two cups instead of one and a half (12 ounces).

Can I add other vegetables? Peas and green beans are great in this soup. Avoid leafy greens, tomatoes, and any type of vegetable that is watery.

Can I add more spices? Nutmeg, cayenne or hot sauce, garlic–all give the soup a bit more depth. Sometimes, I like to use whole black peppercorns instead of ground black pepper.

Can I thicken the chowder without cornstarch? Yes. Make a slurry by mixing flour with cold water in a two-to-one ratio until smooth. Whisk in at the end of cooking. Of course, this adds gluten. 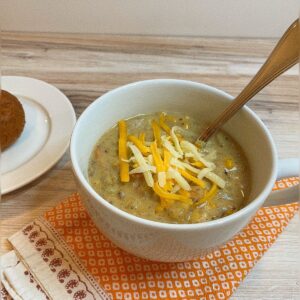 🧂 The sodium in this recipe is high. You can cut it by using low-sodium broth, leaving out the salt, and rinsing the corn. Using water rather than store-bought broth will also help.  👀 Watch the heat when sauteing the onion-carrot-celery. The vegetables burn easily.